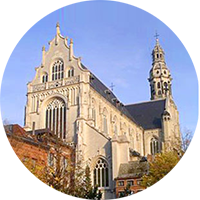 Baroque jewel in a Gothic shrine

St Paul’s Church, close to the River Scheldt, is positively radiant. Once part of a Dominican monastery, it is nowadays a vibrant parish church. St Paul’s is the only place in the world where you can find paintings by the Antwerp masters Rubens, Van Dyck and Jordaens together in the very spot for which they were created. You can admire over 50 paintings here, 200 beautiful statues, furnishings of the highest quality and a magnificent organ. Outside, you’ll find the dramatic, epic Calvary Garden devoted to Christ’s Passion and Resurrection. The church resounds with music on important feast days, with orchestral masses that add yet another dimension.

Due to high energy costs, the church is temporarily closed for tourist visits. The church will be open again starting Saturday, Feb. 17.

on foot: it takes about 25 minutes to walk to the church from Antwerp Central railway station.

by car: there are several public car parks within short walking distance, including ‘Parking Scheldekaaien Noord’
NB: please bear in mind that the whole central Antwerp is a Low Emission Zone. You can find more information at www.slimnaarantwerpen.be/LEZ

by public transport: the church can be reached by Tram 7 (direction: ‘Eilandje’ – stop ‘Klapdorp’). It is then a few minutes’ walk away.

Plan your route at Google Maps

Tours are also offered for schools and for blind and partially-sighted visitors.

Information and booking via sintpaulusvrienden@proximus.be or +32 494 448 253

St Paul’s Church is a beacon within Antwerp’s historical shippers’ quarter. A major surprise and an intense experience await you: the artistic wealth of the church (a magnificent ensemble), the sense of stillness in the heart of urban Antwerp, and the vibrant parochial activities.

From monastery to parish church

St Paul’s Church experienced a landmark year in 1571: almost three centuries since the first little building was completed, a new church was now inaugurated, larger and taller than its predecessor, which used to flood at spring tide. St Paul’s was part of a grand monastery complex belonging to the Dominicans or Friars Preachers, who had established themselves in Antwerp as early as the 1240s to preach the true faith. In 1796, their monastery was abolished by the French authorities, and several years later St Paul’s became a parish church. Its contents have remained intact, even in 1968 when there was a major fire here, from which the church has since recovered.

St Paul’s Church is a Gothic structure, but its furnishings and works of art mainly date from the Baroque 17th century, as does the remarkable crowning feature, the lantern tower. The portal too has a thoroughly Baroque flavour. The depth effect in the church is very striking, due in part to the elongated choir. Light and space play their brilliant game here, in a marvellous harmony of austere Gothic and dynamic Baroque.

It has been possible to visit the Treasury of the church since 2001, with items stretching back over no fewer than eight centuries. What you can admire here comes partly from the former Dominican monastery, but also from the former Church of St Walburga in Antwerp, which no longer exists, and from two centuries of life as a parish church. Besides dazzling ecclesiastical treasures, set with diamonds, you will discover the testimony here of devout parishioners.

St Paul’s Church offers a rich and harmonious ensemble to admire, created by the painters, sculptors and furniture makers of Antwerp, all in a wonderfully light interior full of playful movement.

If you look closely, you will find rosaries – the prayer beads used by Catholic worshippers – all over the place. There is a reason for this: Pope Pius V, who was a Dominican, attributed the victory in 1571 of the Spanish and Venetian navy over a Turkish fleet off Lepanto in Italy to the power of the Rosary prayer to the Virgin Mary. That same year, the Fraternity of the Holy Rosary was founded in Antwerp. The group still exists today.
Around 1617, its members commissioned a magnificent series of 15 paintings by 11 Antwerp masters, including Rubens, Van Dyck and Jordaens. The works, which still hang in the place for which they were created, depict five joyful, sorrowful and triumphant moments in the Life of the Virgin Mary.

Peter I Verbrugghen and his son completed the marble high altar in 1670. It is a monument in black and white, the colours of the Dominicans: white stands for the poverty which the monks vow to adopt, and black to express mourning and sorrow for a sinful humanity. Faith and truth are central concepts for the order and they are also what the two figures at the top represent.

How do you represent visually the battle between good and evil in every human being? Repentance and penance? Look at the ten confessionals by Peter I Verbrugghen and his workshop (1658–1660). The 500 or so little angels alone, complete with their attributes, are sure to set your imagination racing. No matter how sinful you are, you can’t help being cheered up by them. And that’s even before we turn to the 40 life-sized figures.

You simply have to hear the imposing organ, which is one of the finest in Europe. Opportunities include the orchestral masses held at St Paul’s Church on feast days. The organ case was carved in the 1650s by Peter I Verbrugghen and the instrument itself has been rebuilt several times, including around 1730 by the great Jean-Baptiste Forceville.

This theatrical group artwork, a frozen piece of outdoor drama, dates from the first half of the 18th century. It comprises no fewer than 63 life-sized statues as well as nine reliefs. The highpoint is Mount Calvary itself, an artificial rocky hill. Christ’s death on the cross and resurrection from the tomb lie at the core of the Christian faith.