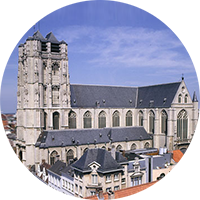 The Gothic Church of St James in the city’s student area will overwhelm you when you enter its Baroque, marble interior with 24 altars. This was clearly a parish church for wealthy citizens, one of whom was none other than Peter Paul Rubens, who was buried here in 1640. His tomb is adorned by one of his own paintings. The church’s art collection, which also includes stylish mausoleums, beautiful church furniture and dazzling precious metalwork is unusually rich. This remains a pilgrims’ church for those making the journey to Santiago de Compostela, and is known for its traditional masses. You can follow the restoration of the interior and exterior of the church from the special viewing platform and through the exhibition.

Visiting the church is free of charge.

On Monday, Wednesday, Thursday and Friday at 11 a.m.
Sundays and feast days at 9 and 10 a.m.
Typical of the liturgy here is the attention to tradition. High Mass at 10 a.m. is always accompanied by Gregorian chant.

Every Saturday, 3–5 p.m. Worship and confession

on foot: it takes about 10 minutes (800 m) to walk to the church from Antwerp Central railway station.

by bike: Velo station no. 27 (Lange Nieuwstraat). You can find more information at www.velo-antwerpen.be

by car: there are several public car parks within short walking distance, including Eikenstraat (Q-Park Antwerpen ’t Stad/De knip).
NB: please bear in mind that the whole of central Antwerp is a Low Emission Zone. You can find more information at slimnaarantwerpen.be/en/LEZ

A guide offers a free tour at regular intervals.
Information via sintjacobskerk@topa.be

Four different themed audio tours are available free of charge using the Antwerp Museum App (antwerpmuseumapp.com): Adults can choose between ‘500 years of world history within a church’ (history), ‘Much more than Rubens’ (art history), ‘Place of faith and devotion’ (religion), and ‘Under construction for 150 years’ (architecture). For children (7 to 12) there is the tour ‘Angels and imps’.

Cost: free
Languages: Dutch, English, French and German
Earbuds are compulsory and not included (available at the church for €1)

St James’ Church is a celebration: a celebration in marble, great art and intense faith. What you see from outside is a robust, sober church in the late-Gothic style. But inside you discover a Baroque treasure house. Anyone setting off from Antwerp to make the journey to Santiago de Compostela in Spain sets off from this church. As a pilgrim’s church, it provided accommodation and care to travellers in the Middle Ages.

St James’ is a parish church, many of whose parishioners were wealthy merchants, bankers and nobles. This partly explains its splendid wealth. The church as it appears today was constructed in phases, from around 1490 to 1656, under a series of celebrated architects. Not everything went according to plan: the truncated tower (now 55 metres high) was originally supposed to be taller than the Cathedral… All the same, the building displays an attractive architectural unity.

For many years, St James’ was a ‘collegiate church’, which meant that it was run in part by a chapter of canons, who prayed to God every day. They did so in the choir, with its magnificent and imaginatively carved choirstalls by Quellin uncle and cousin – celebrated Antwerp artists.

The fact that most of the art in St James’ Church is Baroque in style is due to the destruction suffered during bouts of iconoclastic violence in 1566 and 1581, following which the interior of the church was refurbished. This took the form of Baroque furnishings: confessionals, a pulpit, communion benches and so on. Plenty of money was available, as witnessed by the more than a hundred varieties of marble and works of art by leading masters. The fact that all this is still here is due to a priest who craftily swore allegiance to the French Republic during the period of revolutionary occupation, with the result that the church avoided being stripped and its goods sold off. Most of the stained-glass windows were destroyed, however, during the Second World War.

The altar is the central focus of Catholic worship: it is here that the priest commemorates the sacrifice and resurrection of Jesus Christ during each Mass. St James’ Church has no fewer than 24 altars. Many trades and guilds had one of their own, including the musicians, joiners and lawyers, complete with images of their patron saints. Professional associations of this kind were abolished during the French period.

The central focus of the high altar is the church’s patron saint: St James. The wooden canopy beneath which God is enthroned is in the form of an open scallop shell – the symbol of St James and of pilgrims to Santiago. This is a typical piece of Baroque playfulness, as are the many delightful little angels in the church and the wealth of fruit.

Peter Paul Rubens lived 300 metres away from St James’, which was his parish church. When he died in 1640, it was here that he was buried in a personal chapel, of the kind that several families had installed in the 17th century. Rubens’ descendants had the Chapel of Our Lady built, but the painting with Mary as the principal figure is by the master’s own hand. The grandfather of former city mayor Nicolaas Rockox is buried here too, below a triptych that Jan van Hemessen painted for him on the appropriate theme of The Last Judgement. You will also find many tombs in St James’ Church of parishioners from the 17th, 18th and 19th centuries – a place of honour that cost them or their heirs a considerable amount of money. Each of their tombstones tells the individual stories of people who earnestly hoped that they had earned their place in heaven.

Besides crafts and guilds, this church was also the base for several fraternities with their own, beautiful and appropriately fitted-out chapels, in which members could practise their faith. The Brotherhood of Our Lady and that of the Holy Sacrament are still active today. In the beautiful Sacrament Chapel, you can admire the communion bench made in 1695 by the sculptors W.I. Kerrickx and H.F. Verbruggen – so true to nature that you forget it is marble. Jesus, the Lamb of God, is the central figure. The “Sint-Job” chapel on the south side of the church is dedicated to musicians and minstrels. Both the altar and the sculptures contain many musical references. The altar painting, for instance, shows Mary Magdalene, one of the patron saints of the musician’s guild. In the painting, she is entranced by the choir and orchestra behind her. On either side of the painting, an angel holds a perfectly legible musical score. It contains a seven-part canon of the Magnificat, a hymn to the Virgin Mary. The famous ensemble Capilla Flamenca performed this piece of music. Find out here what that sounds like.

Old murals were often hidden away beneath a layer of whitewash, as they were no longer to people’s taste. Some of them are now being painstakingly uncovered, including examples in St James’ Church, which were revealed in 2002 during a study of the interior. Discover more about the church’s rich collection (topa.be)
X