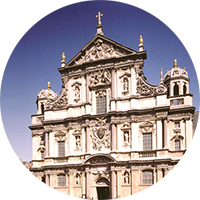 The most important baroque church in the Low Countries

The square where this triumphant Baroque edifice stands is like a little piece of Italy. The Antwerp Jesuits built the church between 1615 and 1621, at the height of the Counter Reformation. To people at the time, it was ‘heaven on earth’. And it still is to this day, with its dynamic facade, refined interior, two storeys and the sublime Lady Chapel. Rubens made a significant contribution to the church, as both joint designer and painter. The building also boasts a remarkable collection of lace and textiles. And it is the home of the Community of Sant’Egidio, which is devoted to the poor, to dialogue and to peace. A special tradition is the Sunday Artists’ Mass, complete with choir and musicians. Be sure to visit the crypt, the sacristy and the subterranean canals too.

Visits to the church are free of charge.
Lace Museum: € 5

on foot: it takes about 20 minutes to walk to the church from Antwerp Central railway station.

by bike: Velo station no. 56 (Minderbroedersrui) and 57 (Wolstraat). You can find more information at velo-antwerpen.be

by car: there are several public car parks within short walking distance, including Eiermarkt and Korte Klarenstraat (Shopping Meir).
NB: please bear in mind that the whole of central Antwerp is a Low Emission Zone. You can find more information at slimnaarantwerpen.be/en/lez

by public transport: the church can be reached from Antwerp Central railway station by Tram 11 and 24 (direction: ‘Melkmarkt’ – stop: ‘Melkmarkt’). From there it about a minute’s walk.

Besides a tour of the church, you can request an interesting behind-the-scenes visit, taking in the sacristy, the crypt, the dais behind the painting on the high altar and the reliquary of St John of Nepomuk. An additional € 5 per person is charged for the visit behind the scenes.

Tour of the Lace Room

Antwerp has been crisscrossed by ruien– waterways and moats – since the Middle Ages. At one stage, however, they were roofed in and turned into sewers, robbing the cityscape and local memory of a unique piece of heritage. The covering over of ‘De Ruien’ was done largely by the Jesuits, to create space for the Church of St Charles Borromeo and its associated buildings.
A guide will take you on an individual or group tour of St Charles Borromeo’s Church, following which you can descend via a reopened historical entrance into the underbelly of the city, for a fascinating walk through the final stretch of the sewer towards Keistraat.
In the course of this unique combined walking tour, the Church of St Charles Borromeo will reveal several of its secrets, besides its dazzling collection of treasures and art works, including a visit to the Lady Chapel, the sacristy and the centuries-old crypts.

Information and booking for the combined walking tour via ruien.be/nl/combiwandeling-sint-carolus-borromeus/

Conscienceplein in Antwerp feels like a piece of Italy, where your eyes are drawn immediately to the magnificent facade of St Charles Borromeo’s Church. The square – the first in the city to be closed to traffic – is a mini piazza, with the inspiration for the facade provided by Il Gesù, the Jesuits’ mother church in Rome. And inside, an exuberant jewel awaits you.

It was in 1615, at the height of the Counter Reformation, that the Antwerp Jesuits began construction of their Baroque church. Our Lady’s, as it was initially called, was completed as early as 1621. When Ignatius of Loyola (1491─1556), the order’s founder, was canonized in 1622, the church was renamed St Ignatius in his honour.
One of the ‘architect-decorators’ who worked on the building was Peter Paul Rubens (1577─1640), together with his studio. It is ‘his’ church, too, although 39 large ceiling paintings by Rubens were destroyed by fire in 1718. The Jesuit Order was suppressed in 1773 and several decades later the building became a parish church, as it remains to this day, with a new patron saint: Charles Borromeo or Carolus Borromeus – a famous 16th-century bishop from Milan. Today, worshippers still congregate in this house of God to hear His Word.

What you see and experience as you enter is a Baroque chamber in which to celebrate the Lord, with an exceptionally harmonious, two-storey spatial effect. A miniature heaven on earth, which is precisely how it was intended and for which no expense was spared.
The church looks more sober in our time than the ‘marble temple’ it once was, due not least to the fire in 1718. All the same, more than enough remains to admire and to discover – certainly since the restoration work carried out in the 1980s.

Looking and being amazed: these are essential to a Baroque church. Because by seeing how Christ lived and suffered, and how exemplary the saints are, you as a worshipper feel more involved. So you can empathize and meditate more deeply, as Ignatius of Loyola, founder of the Jesuit Order, once wrote. His ideas were put into practice here.

1. Facade with a message

The theatrical facade of this Baroque church deliberately attracts the attention, like a stone hoarding advertising the Catholic faith. Jesus and the saints seem to gaze out at the passers-by. We see the four Evangelists and the Apostles Peter and Paul, while the bust of Ignatius of Loyola, another proclaimer of the faith, stands out below Jesus and Mary. This is a place where the Word of God is proclaimed!
The sculptures are surrounded by festive, joyful shells and garlands of flowers, baskets of fruit, masks, torches and pilasters in a distinctive Baroque style. The warm, cream-coloured sandstone alternates with grey freestone. Note also that the facade is as broad as it is tall (33 metres) and how the vertical and horizontal movements balance one another harmoniously. The emblem of the Jesuits, held aloft by hovering angels, was designed by Rubens.

The impressive high altar draws your attention, which was precisely the intention. During services, worshippers can gaze at the gigantic ‘screen’ that hangs there: a painted altarpiece over five metres in height. A unique historical system of pulleys and grooves mean that you can see three different canvases here – it used to be four – in the course of the year. Rubens is believed to have been involved with the design of the high altar, particularly its wide, black marble surround.

To ensure that the high altar would continue to command the attention of churchgoers, the Antwerp Jesuits saw to it 400 years ago that the painting could be changed over; rather like switching the scenery in a theatre. A box, split into compartments, was constructed behind the altar out of which a painting could be hoisted up using an ingenious pulley system and a lot of muscle power. There was originally a choice of four paintings, three of which remain today. The theme of each one corresponds with a particular period in the liturgical year. The images do not simply illustrate the liturgy, they are also intended to move worshippers emotionally and to encourage them to reflect more deeply.

The pulley system still works, and you can attend the unique changing of the paintings on Ash Wednesday, Easter Monday and the Feast of the Assumption.

3. The Lady Chapel
also known as the ‘Rubens Chapel’ or ‘Houtappel Chapel’

Anyone in Antwerp who would like to be transported by a playful, opulent Baroque absolutely has to visit the Lady Chapel in this church, which was created with the financial support of the Houtappel family. The space is an exuberant play of colourful marble, fanciful lines, flowers and bunches of grapes, shells, garlands of flowers, masks and more besides. You can follow the life of the Virgin Mary in painted scenes on the walls and on the altar, culminating in her Assumption into heaven. The works are by Hendrik van Balen and Jan Brueghel The Assumption of the Virgin – a copy after an original by Rubens, now in the Kunsthistorisches Museum in Vienna – hangs above the altar. The ceiling was also designed by the great Antwerp master.

At the back of the church, near Sint-Katelijnevest, stands one of Europe’s finest examples of Baroque tower construction, 58 metres tall. Drawings by Rubens still exist for this too: he was involved in the tower’s design and was visibly influenced by Italian examples, as you can see in the Venetian-style openings and the cylinder at the top. Rubens also used this ‘serliana’ feature in the garden pavilion of his own home, the Rubens House.

5. Fragile and precious: lace and silk

The outstanding lace collection is a hidden treasure that you can find at the end of the north gallery, safe and quiet. Because lace is incredibly fragile. The fact that this 17th-century textile has survived for so long is a miracle in itself. You can also discover silk here from China – testimony to Jesuit missions to the Far East.

The exhibition Rubens Re-Viewed evokes 36 of the 39 lost ceiling paintings by Peter Paul Rubens at St Charles Borromeo’s Church. The artist Rudy De Graef has made 18 etchings based on the lost ceiling paintings from the first-storey gallery.
A luminous installation with mirrors can be seen on the ground floor of the church. A smaller version of De Graef’s work can be taken in at a glance on 18 small columns spread around the church, together – using a mirror – with a projection of the work that Rubens created as a ceiling painting. The columns are arranged in such a way as if Rubens’ original paintings were once again installed in their original place.
Rubens’ works depicted a series of saints, together with themes from the Old and New Testaments. The Baroque versions by Rubens and the streamlined, graphic versions by De Graef engage in a dialogue, through which the centuries-old tales of salvation, faith, power and love are given a contemporary interpretation.
De Graef wants the installation to help open up the church’s art treasures, both surviving and lost. He also aims to spark a debate as to whether the installation of large replicas or rather interpretations by contemporary artists in the ceilings could not lend the interior a greater dynamism and bring it to life, as must have been the original intention.