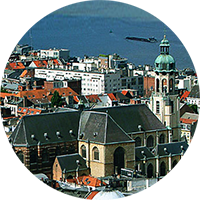 A late-gothic church, a revelation

The Gothic Church of St Andrew is located in Antwerp’s trendy fashion district. No less a visitor than Vincent van Gogh was fascinated by its colourful stained-glass windows. Also look out for the impressive high altar, the wonderful pulpit with its realistic characters, the monument with the portrait of the Scottish Queen Mary Stuart, and the outstanding paintings and sculpture. The designer Ann Demeulemeester dressed the statue of the Virgin Mary. In the Treasury and the museum (SAM) you can join the procession and experience life in what was once known as the ‘parish of misery’. Old rituals are transformed here into colourful celebrations in contemporary language.

The church is freely accessible.

Eucharist: Sundays and public holidays at 10.30 a.m. and 7.30 p.m.
These services are regularly accompanied by organ music and performances by a guest choir. The service on the second Sunday of the month is followed by a get-together over a cup of coffee. More information via www.sint-andrieskerk.be
Sint-Rita devotion and Rosary: every Thursday at 3 p.m. followed by coffee.

on foot: it takes about 30 minutes (2000 m) to walk to the church from Antwerp Central railway station.

by bike: Velo station no. 66 (Modemuseum) and 70 (Sint-Andries). You can find more information at www.velo-antwerpen.be

by car: there are several public car parks within short walking distance, including Groenplaats and the Kaaien (waterfront).

NB: please bear in mind that the whole of central Antwerp is a Low Emission Zone. You can find more information at slimnaarantwerpen.be/en/lez

Every Sunday from May until the end of September at 3 p.m.

Before or after the tour, the room next to the church can be booked for coffee and cake. Advance booking required. Tailored arrangements possible on booking. Information and booking via sint-andrieskerk@topa.be or +32 3 226 52 53

In the Sint-Andries district of Antwerp, you will be surprised by a charming church with some beautiful and outstanding works of art. It is located in what used to be a working-class area, and is now Antwerp’s fashion and antique quarter. St Andrew’s Church is a discovery: a place to catch your breath. The volunteers always offer a warm welcome!

From monastery to parish church

The beginning of the story is a turbulent one. Augustinian monks began work on the construction of their monastery and its church in the early 16th century, but they were sent away again shortly after 1520 because of their support for the reformer Martin Luther, who was himself an Augustine. The church was largely finished in 1529 on the initiative of the region’s governor, Margaret of Austria. The institution now became a parish church, for a neighbourhood that continued to grow steadily. It was dedicated to Andrew, who was also the patron saint of the House of Burgundy, of which Margaret represented the last generation.

St Andrew’s Church was one of the many victims when Antwerp was gripped by iconoclastic violence in 1566, following which the Calvinists briefly assumed control. The Protestant interlude ended in 1585, following which Catholic parishioners oversaw the rebuilding and expansion of their church. They included Peter Paul Rubens (1577─1640), who belonged to the parish for a while. Another moment of crisis came in 1755, when the dilapidated tower collapsed and was replaced with a Baroque structure. The lantern on the tower was renewed in 1968. The church suffered serious damage during the Second World War. St Andrew’s is a place of worship, in other words, that has experienced many lives.

What you admire today in St Andrew’s Church comes largely from other locations: the building was refurbished following the period of French revolutionary occupation. Other works of art, by contrast, have been here for centuries. The church continues to live an intense life, having gradually changed in step with its times and its worshippers. Following the comprehensive recent restoration, St Andrew’s has regained its former radiance.

The architecture you can admire at St Andrew’s Church is mostly Baroque. You’ll need to take your time, to allow yourself to soak up the unique atmosphere of this place of worship and to enjoy its masterpieces.

To save himself on the night of Christ’s arrest, the Apostle Peter denied that he knew Jesus, not once but three times. It was a lie with which he had to struggle ever afterwards. In 1658, the sculptor Artus I Quellin carved this serene St Peter in white marble. It is an absolute masterpiece.

St Andrew’s was closed for several years around 1800, during the period of French revolutionary occupation. Shortly after that, it was given a magnificent new high altar that originally belonged to the prestigious Abbey of St Bernard in Hemiksem near Antwerp – a dynamic Baroque work from 1729 by W.I. Kerricx and Peter I Verbrugghen. In it, we see Mary, the mother of Jesus Christ, being carried up to heaven in a swirling spectacle.

The priest addressed his parishioners about the true faith from the pulpit. The brilliant specimen in St Andrew’s Church was made in 1821 by J.B. Van Hool and J.F. Van Geel. What we see fits the function of this piece of furniture perfectly: Jesus is speaking to Andrew and his brother Peter, two fishermen, calling on them to follow him and become ‘fishers of men’. They are to share Jesus’ message with the people, just like the priest every week in his pulpit. Look at the realistically rendered material, the faces of the figures, their catch, the rocks and the plants.

The colourful statue from around 1585 – the Catholics had recently got their church back – is a slender and elegant Mary. It usually stands on the altar devoted to her and is dressed in custom-made clothes that match the time of year and the liturgy. The coats of arms on the socle are like trophies: they are an expression of gratitude for Mary’s help during battles against the Ottomans. The most recent outfit dates from 2001 and was created by the famous fashion designer Ann Demeulemeester.

The Treasury dates from 2006 and is the most recent part of the church. You can discover here how the Catholic faith is experienced in the church and in the neighbourhood. The kind of objects you can see were used during mass, in processions from the church, the veneration of saints, helping the poor and for worship at home.