— Cathedral of Our Lady — 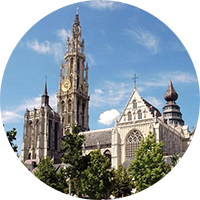 Cathedral of Our Lady

The Cathedral, with its lofty North Tower decorated with lacework tracery, is the tallest Gothic church in the Low Countries. Our Lady’s is the pride of Antwerp, finished in 1521 after 170 years of construction. As soon as you enter, you sense the quest here for higher things. What you see is partly Baroque, partly 19th-century Neo-Gothic. The Cathedral’s furnishings, stained-glass windows, mausoleums, paintings, sculptures and organs are of sublime quality. Among them are four works by Rubens, including the world-famous Raising of the Cross. Historic art also engages in a dialogue here with contemporary work, just as the vibrant church community embeds its traditions in today’s society.

De Plek is a hidden gem located next to the sacristy of Our Lady’s Cathedral in the former St John’s Chapel. The menu includes the Cathedral’s delicious house beers, Aurora and Memento, as well as a selection of delicious light meals. De Plek also has a terrace that offers a view of the Cathedral you won’t find anywhere else. Churchgoers, tourists and local people: there’s something for everyone.

You’re welcome to join us during the Cathedral’s visiting hours (De Plek is closed Tuesdays).

on foot: it takes about 20 minutes to walk to the Cathedral from Antwerp Central railway station

by bike: Velo station no. 60 (Grote Markt), 17 (Groenplaats) and 20 (Groenplaats 2). You can find more information at velo-antwerpen.be

by car: there are several public car parks within short walking distance of the Cathedral.
NB: please bear in mind that the whole of central Antwerp is a Low Emission Zone. You can find more information at slimnaarantwerpen.be/lez

by public transport: the Cathedral can be reached from Antwerp Central railway station by Tram 5, 9, 15 (direction: ‘P+R Linkeroever’ – stop: ‘Groenplaats’). It is then a few minutes’ walk away.

There is a choice of different themes, advance booking required.
Information and booking via info@dekathedraal.be or + 32 (0)3 213 99 51

After each of the activities mentioned above, you can visit our meeting space, De Plek, for a drink or a reception.

A tailored, age-appropriate programme is available on request.

The largest Gothic church in the Low Countries. The pride of Antwerp. An interior that is a forest of stone. A place of intense and living faith. In short, a cathedral of a church. That’s Our Lady’s. Yet she once came close to demolition …

The Church of Our Lady was completed in 1521 after 170 years of building work on the site of its Romanesque predecessor. The final flourish was the unusually elegant North Tower, measuring 123 metres in height. A good 30 years later, the church became a cathedral, the seat of a bishop.
Shortly afterwards a wave of Calvinist iconoclasm swept the region. The Cathedral was a victim too. The interior was refurbished in the 17th century, Rubens’ time, in the Baroque style. Just under two centuries later, the building came under attack again around 1800. The church was plundered and even threatened with demolition. (Fortunately, the municipal architect Jan Blom prevented this.) Consequently, much of what you see in the Cathedral today looks 19th and 20th century, and often comes from other churches.

A nave with no fewer than seven bays, 48 giant pillars, 128 windows, a lofty choir, full of light: no wonder every visitor is so impressed by the spatial effect. It’s what makes Antwerp Cathedral so special and so imposing. You sense the quest here for higher things. And you should also picture the vibrant Christian life that has gone on for centuries in the Cathedral, with its many altars (against the pillars) and chapels, and its brotherhoods, guilds and crafts at prayer. Important moments in the life of the community were and still are celebrated here in communion.

The Cathedral, which came through the two World Wars without any significant damage, has been thoroughly restored in the past half century, both inside and out. This revealed a great deal of new information about its past lives. The building has regained its splendour: for worshippers, for the proud people of Antwerp and for its many visitors.

The furnishings, the many stained-glass windows and the works of art in the Cathedral are partly Baroque and also substantially Neo-Gothic and 19th century. A number of older works were originally made for other churches and ended up here after the French period. A voyage of discovery awaits you!

The great master Peter Paul Rubens made five paintings for the Cathedral: works that are packed with Baroque drama and emotion. Three of them are still here and have been joined by a fourth, the Raising of the Cross, which originally belonged to the Church of St Walburga in Antwerp, which no longer exists. The Descent from the Cross by Antwerp’s most famous citizen is world-famous.

2. Pulpit of the world

Michiel van der Voort’s 1713 pulpit is very imposing. From here, the priest preached Christ’s message to worshippers. Spreading the faith is also the theme of the decoration, with the symbols of the four Evangelists and four women representing the then known continents. This masterpiece came from the demolished church of St Bernard’s Abbey in Hemiksem near Antwerp, along with the six confessionals and a communion bench.

Mary is omnipresent in her cathedral: painted and sculpted in marble, stone and wood, in a variety of styles and in works from different periods. To Catholics, she is the ultimate mediator between heaven and the world of human beings, not to mention the patron saint of Antwerp. Her statue (from the 16th century) is famous and much-loved. Be sure to look at the painting in the high altar, too, a work by Rubens showing the Assumption of the Virgin into heaven. The same subject can also be found in the gigantic canvas in the crossing tower, 43 metres high. This version is by Cornelis Schut, a contemporary of Rubens.

You will find Neo-Gothic painting, furniture, stained-glass windows, statues and architecture throughout the Cathedral. The five chapels around the choir in particular are finished in a consistently Neo-Gothic style, down to the floor and the silverware. Opinions on the Neo-Gothic are divided, but whatever you think of it, the style certainly gave the Cathedral back its overall harmony.

Before the period of French revolutionary occupation, the choirstalls were the place where the Cathedral’s canons came to say their daily prayers. The chapter was abolished in 1797 before being re-established in 1965. The oak choirstalls were made around 1840 by François Durlet, in his twenties at the time, and are an important work of Neo-Gothic art. Oddly enough, they date from a period when there were no canons to use them. The 72 seats are decorated with 36 abundantly carved scenes in high relief depicting the Life of Mary.